[This is the second in a series of articles describing installation of a solar hot water system.]

The solar panel was not in stock at AAASolar, so we had to wait a couple of weeks for it to be freighted to the shop. We have access to a truck, so we could pick up the goodies at the shop and not have it delivered. 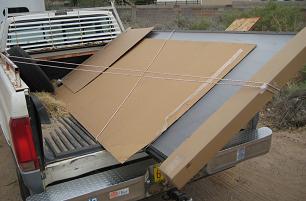 We could have transported the solar panel and storage tank in one trip, but decided to truck them separately to avoid any possibility of damaging the panel. Cracked glazing would have made me very sad.

Here is the storage tank protected for the trip: 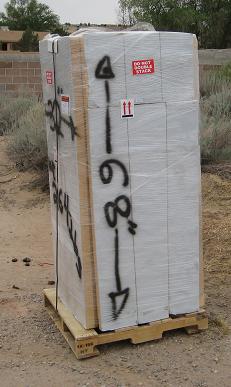 The solar panel is solid and heavy, approximately 150lbs, too massive for one or two people to carry up a ladder. In retrospect, the easiest way to get this panel onto a flat roof is crowd-sourcing: get six good friends or family members with ropes pulling and pushing the panel together. Sadly this particular day I was (almost) friendless, so cleverness was in order. Phil and I fastened a 4×4 crossbar between two ladders, affixed a pulley in the middle, and tied a rope harness around the panel. We parked Phil’s jeep with electric winch in the garage underneath the ladders (barely seen in this photo because the dark-colored vehicle is in shadow).

The winch and pulley pulled the panel up to the roof, while one person on the roof steadied the panel using ropes. Again, this technique worked but is overly complex– use crowd-sourcing instead.

I could not work out how the mounting hardware fastened to the panel, and no documentation was included. AAASolar had no instructions for this particular model, and recommended we contact the panel manufacturer SunEarth. No instructions were found on the web site– a helpful person on the phone faxed us the drawings we needed. 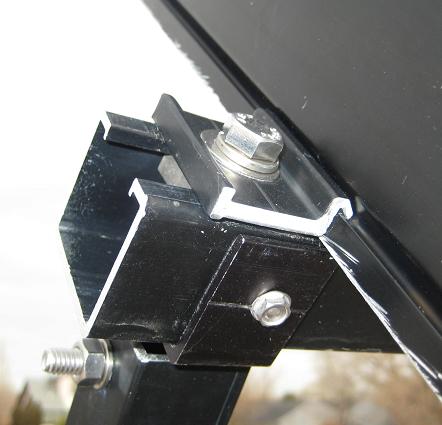 One thing apparent from the drawings is that the panel is mounted  with the shorter side along the roof, unlike most panels we see installed in this part of the country: Good to know!

We needed to bolt the panel mounting hardware to the roof with long lag bolts sunk into roof joists. The problem was finding the roof joists! Two different stud finders gave no consistent readings on the roof (and yes, we did try the trick of using cardboard over this rough surface), and we drilled two or three holes that totally missed a joist. It’s bad enough to be drilling into a perfectly nice roof, but to miss the timber beneath and have to patch the hole is most embarrassing.

Finally, we hit upon the trick of drilling a test hole at a shallow angle, and then using a coat hanger wire as a probe to test for where the joist is located. 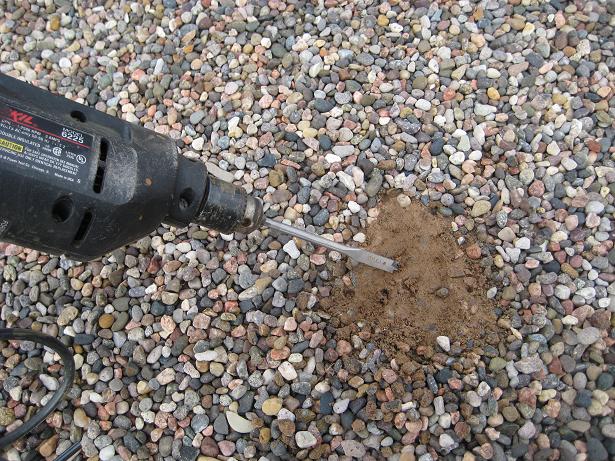 Once we know where one joist is, we should be able to find the next one, assuming the joist spacing is the same as over the garage, where joists are visible. One final indignity: the joist spacing was different on this section of the roof, so we had to drill another shallow angle test hole as before and patch it afterward. We used 2×4 boards as footers to help spread the weight on the roof surface, and screwed long lag bolts through the metal mounting block, the wood footer, and into the roof joist. 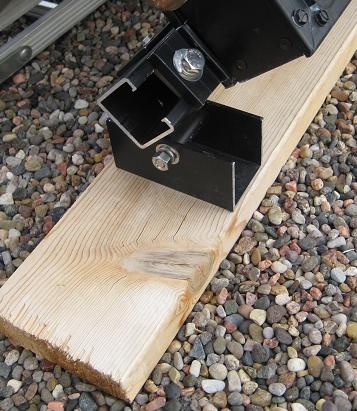 Albuquerque has a 35 degree latitude. We elevated the panel to 55 degrees, to give more sun in the winter when the panel needs it most. 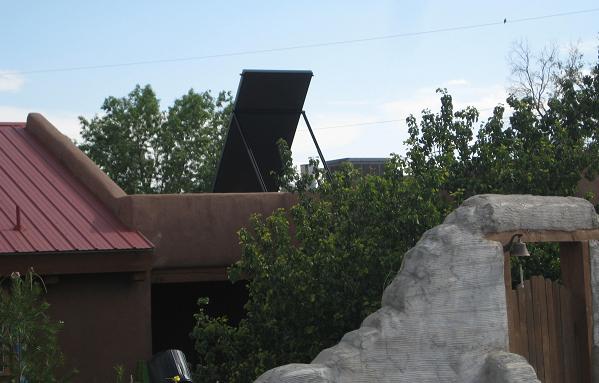