A new update is available for MouSing, for Windows. Version 3.0 is the first version with native 64-bit support. A 32-bit version is still available. Minor documentation changes are also provided, with no major new features.

For all existing MouSing for Windows customers, your registration codes continue to work with the new version.

Recently we described how to add new instrument voices to WinChime, beyond those pre-defined in the drop-down list.

TL;DNR version: Enter the MIDI instrument number (minus 1) in the edit box portion of the drop-down list.

You can do the same trick in MouSing, on the MIDI tab main window. 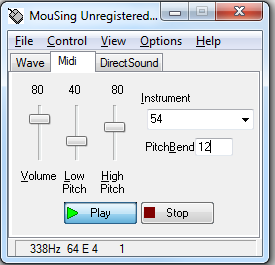 We actually forgot this trick,  but the capability was recently rediscovered by a tester. (The help file will be updated in the next program update to include a MIDI instrument table as a reference.)

MouSing MIDI depends on pitch bending, which varies in quality of implementation by audio device. In particular, MouSing-MIDI works best with large pitch bend ranges, beyond the plus-or-minus two semitones in the General MIDI specification. With large pitch ranges, MouSing doesn’t need to start a different note because that produces a note attack sound– not very theremin-like. If you hear a break in the sound when using MouSing-MIDI, that’s what is happening: you hit a note boundary and have started another note with its associated attack.

Useful theremin-like MIDI instrument voices have indefinitely long sustain and little or no attack. We pre-defined six instruments in the drop-down list: Ocarina, Synth(sawtooth),. Synth(square), Flute, Whistle, and Choir Aahs. We left out a few that might be useful, so refer to the table in this article and experiment. 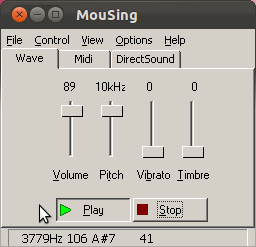 Thereminhero.com has some info, but for details on implementation, check out the comments in the YouTube video. [hat tip Hackaday]

On this date 84 years ago the original theremin patent was filed in Germany. 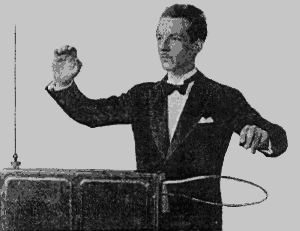 The USA version of the patent was filed December 5, 1925, almost a year later. Read the English language HTML version here.

Ken Moore marries a Wiimote with computer and synthesizer to a theremin.

Not taking sides here, but this caught our attention: