How could one record left and right audio channels to separate files?

RecAll-PRO version 1.5 or later has an undocumented (until now) command-line option to record only from left or right channel of an audio signal.

The program should be configured to record Mono audio for this option. (Command-line parameters are not case sensitive here.)

Windows XP and Vista allow more than one program to record from the same audio input device. If we start two instances of RecAll-PRO, one recording from the left channel and the second recording from left channel, we should be able to record from two mono audio sources into two separate audio files, using one sound input device. This could be useful for applications that monitor several inputs, such as recording multiple telephone lines or multiple radio stations.

In practice, we need an input audio device with little or no crosstalk between left and right channels. We tested a sound card some years ago with significant channel-to-channel crosstalk, but recent tests with modern sound cards show no audible crosstalk. To test, we need to build a simple two-mono to one-stereo adapter: 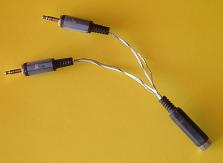