Our programs need an Mpeg ACM (Audio Compression Manager) codec to be installed in order to record MP3 files.

Get the free open-source Lame ACM codec at
http://www.softpedia.com/get/Multimedia/Audio/Audio-CD-Rippers-Encoders/LAME-ACM-Codec.shtml
(Be certain you download codecs from a trusted reputable source for your safety.)

You may need to reboot your computer after installing for the codec to be enabled.

Now open up our program (RecAll-PRO, RecAll, VCRadio, etc) and go to the MP3 tab, and you should see a list of different bit rates available, indicating the Mp3 codec was successfully installed. 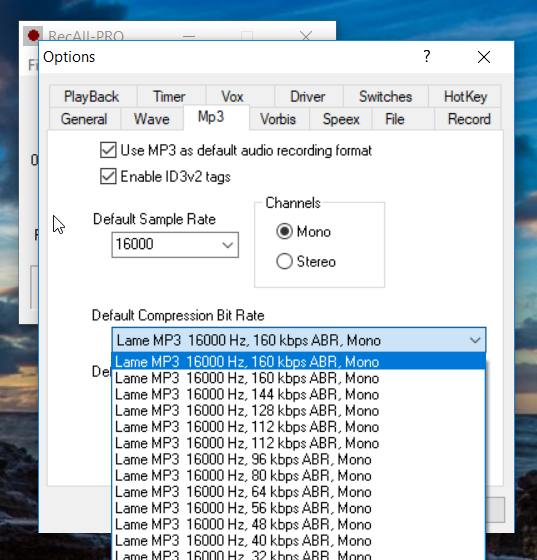 Mp3 Support for Windows Before Windows 10

What is mp3?
Is mp3 legal?
What is the difference between mp3 and wav files?
How do I record mp3?
How do I obtain an mp3 encoder/decoder?
Why doesn’t mp3 appear in my list of available compression bit-rates?
Is this program compatible with other mp3encoders?
We were able to record mp3, but now cannot!

What is mp3? Mp3 is an audio file format using a particular very efficient audio compression method with good fidelity for both music and voice.

Is mp3 legal? Mp3 files are not against the law;unauthorized distribution of copyrighted audio, whether in mp3 or wav or any other file format, can be illegal by violating copyright laws and treaties.Nothing here should be construed as legal advice. Consult your lawyer or appropriate government agency.
Mp3 may be covered by certain software patents, in countries that recognize software patents such as the USA, and patent holders may claim royalties on mp3files created for sale to others. Patent holders may also claim royalty fees for distribution of mp3 encoder software or hardware.

What is the difference between mp3 and wav files?Wave files can incorporate uncompressed audio or one of many compressed audio formats. Wave files using MPEG compression are similar, in some cases, tomp3 files, but with a few extra formatting bytes at the beginning. (Sometimes a wav file using mpeg compression can be renamed as an mp3 file and played in anmp3 player, but this will not always work, and your results may vary.)
Wave and mp3 files use different methods to embed textual information within the file. Mp3 files use id3 and id3v2 tags.

How do I record mp3? If mp3 is not the default recording file format for your Sagebrush program, click menu Options->Preferences->Mp3, and enable “Default file format”. If “Default compression bit-rate” has no valid selection, keep reading…

How do I obtain the MP3 codec?

Why doesn’t mp3 appear in my list of available compression bit-rates? An mp3 encoder licensed by Microsoft and often residing on Windows computers is the “Fraunhofer Advanced MPEG” codec, which conforms to the Microsoft ACM (Audio Compression Manager) interface. This file is named L3CODECA.ACM and would be found in the Windows System directory. This particular encoder has limitations on available bit-rates and sampling rates.Keep the sampling rate at 22050 or below to use this codec.
The “professional” flavor of the Fraunhofer ACM codec is L3CODECP.ACM in the Windows System directory, and might be bundled with particular programs, and has a more extensive selection of bit-rates and sample rates supported.

Windows 7 (and possibly Windows Vista) have the L3CODECA.ACM ANDL3CODECP.ACM files, but encoding has been disabled. Sneaky! If you need to record MP3 files on these flavors of Windows, you will need to obtain the Lame ACM codec mentioned above.
Another version of the Fraunhofer ACM codec is L3CODECX.ACM, and appears to be decode-only.
Sagebrush programs such as RecAll-PRO do not come bundled with mp3 encoders,but if an mp3 ACM encoder is installed on your computer, our program will attempt to use it.

If you have WinXP with latest service packs, the L3CODECA.ACM codec may already be installed. If the file is present in the Windowssystem32 directory,but does not show up in the list of codecs as described above, you may be ableto install the codec by clicking Start button->Run and entering:

If you have Win98, the codec may already be installed. If it isn’t, the following manual installation should be performed by experienced Power Users only: Use Explorer to open WIN98WIN98_50.CAB on the Win98 install CD, locateL3codea.acm, right-click on that icon to extract and copy it to the Windows System directory. Then, for users of Win98, go into the SYSTEM.INI file in the Windows directory, and add the following line in the [Drivers32] section:

Other flavors of Windows, such as WinXP, do not use SYSTEM.INI to inform the operating system about the codec– the information appears to be stored in several locations in the registry, instead.

If you have the codec, it would be a good idea to make a backup copy, in case some future software installation accidentally overwrites it.

Is this program compatible with other mp3encoders? Sagebrush programs presently only works with ACM (Audio Compression Manager, an interface defined by Microsoft) codecs. Other MP3codecs, that use non-standard interfaces, can not presently be utilized by Sagebrush programs. This may change in future versions, or certain MP3 encoders may be made available with an ACM interface by other parties. However, you will still be responsible for determining if these encoders comply with your local copyright and patent laws.

We were able to record mp3, but now cannot! We received reports from several users that installing a program from Roxio prevented Sagebrush programs from recording mp3 files.

We obtained a licensed copy of Roxio Easy CD Creator 5, bundled with a CDRW drive, and installed on a Win98 machine in which a working version ofL3CODECA.ACM was already present. Indeed, we observed that Sagebrush programs were now unable to record mp3! Upon examination of the SYSTEM.INI file in the Windows directory, we observe a line in the [Drivers32] section changed from

Fortunately, the L3codeca.acm file had not been deleted from the Windows System directory. Replacing the offending line fixed the problem. (We didn’t investigate how this change affected the Roxio program.